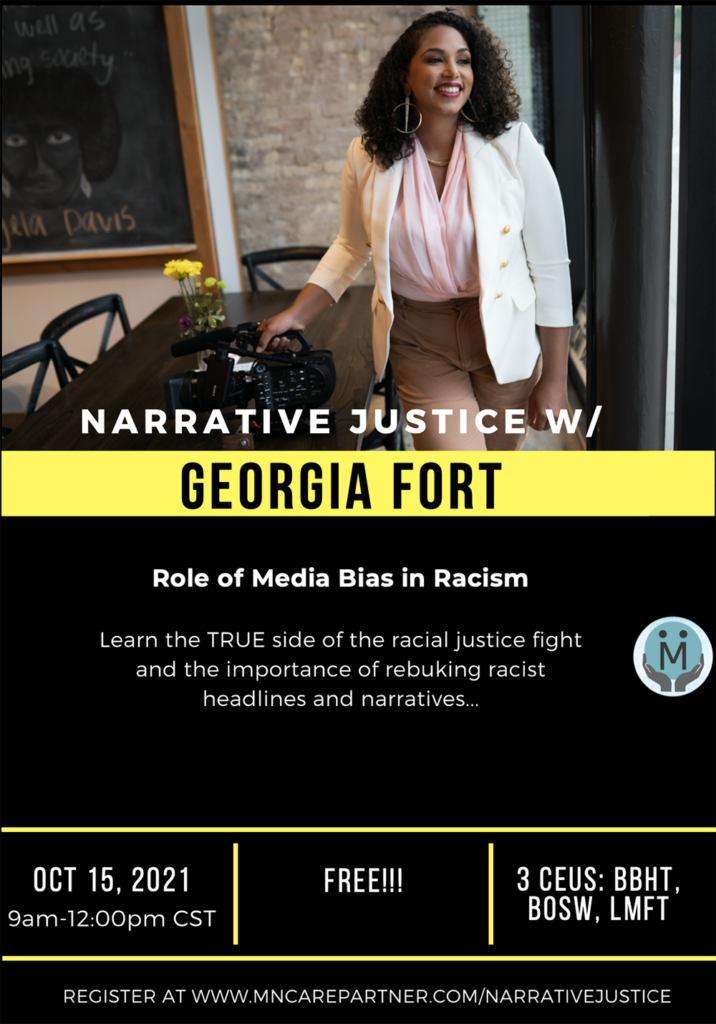 A three-hour course that will define narrative justice and the historical context narrative has held in systemic racism and media. Empower attendees with the critical thinking required to identify and combat racist narratives in media and beyond and equip participants with basic tools to construct new and alternative narratives that contribute to a more equitable society.

Upon completion of this training, attendees should be able to

Hour 1 – What is Narrative Justice?
Defining narrative justice and the historical context narrative has held in systemic racism and media

Hour 3 –  Being a champion of Narrative Justice
You can be a part of the solution. In our last hour, we will equip you with the tools to construct new and alternative narratives that contribute to a more equitable society.

Georgia Fort is a two-time Emmy nominated Independent Journalist who is changing the narrative through visual stories about race & culture that build equity.

She was one of two reporters in the courtroom for the sentencing of Derek Chauvin, the former officer who murdered George Floyd. Her reporting has been published on CNN, ABC, NBC, Fox and CBS affiliates. Most recently she produced a short documentary “George Floyd: It Happened Here”, and co-directed and edited the award-winning documentary “Rondo: Beyond the Pavement” which is now available on Amazon Prime. The Minnesota native has over a decade of broadcast experience and graduated from the University of St. Thomas where she advocated for student parents and diversity inclusion. She has three daughters and is married to boxing gym owner and professional boxer, Cerresso Fort. The pair also partner in philanthropy through their non-profit Fight For Your Dreams.